Skip to content
Bret Weinstein and his wife Heather Heyting after refusing to leave the campus on the controversial “Day of Absence,” resigned with a settlement with Evergreen State College in 2017. Here is a three-part documentary about the affair:

After watching the three videos about what happened at Evergreen State College in 2017, I have made the following judgment. Although the focus is on the dismissal of Heather Heyting and Bret Weinstein from the college, it is more like a study of how a mob is allowed to take control of a college.

What Bret Weinstein did at Evergreen by not participating on the “Day of Absence” was equivalent to striking a match in standing conditions which caused the match to burn.

What were these standing conditions? A college is a business enterprise (corporation). It has a board of trustees, a CEO, managers, and workers. And it has a clientele — the students. Everyone who works at the college is relying on their job for a livelihood (self-preservation).

The culmination of a student mob taking over was initiated by the new President, George Bridges, who was hired in 2015. He introduced a policy statement for the college to recognizing a phenomenon called “Racism,” and a school policy formulated by an Equity Council to fight against this Racism. Part of this policy required a contractual yearly written self-evaluation of racism by each white faculty member. There was also a policy of requiring some kind of “equity” justification for hiring new teachers. This policy was voted on openly by the faculty senate. And the majority — probably out of fear for losing their jobs — voted in favor.

As events progressed, it was evident that the white faculty had to submit to the wishes of student mobs. In fact the students were allowed by the President to take control of speech. The main one was a censorship (by booing, disruption, and silencing) as based on the assumption that to criticallly examine racism is Racism. Students were also allowed by the President to take physical control of buildings to the extant that faculty were in effect hostages.

Evergreen also had a tradition of a “The Day of Absence” on which black students and faculty were encouraged not to attend the college. In 2017, this holiday was switched to asking white teachers to absent themselves from the college. One white teacher, Bret Weinstein, refused, and held a class on this day.

A group of students — both students of color and white — confronted him outside his classroom and clamored for his dismissal. And as time progressed, it became something like a lynching mob. And the security personnel were ordered by the the President to stand down. In consequence Bret Weinstein had to go into hiding. And finally a settlement was reached with Bret Weinstein and his wife Heather Heying for their dismissal.

Comment: A school should be a place for the critical examination of everything, including the nature of what is called “racism.” And a critical discussion is not a free for all shouting. There must be some kind of procedural rules. In the case of Evergreen State College, the President made a fundamental mistake of taking an institutional stance against what he understood as “racism.” He further aggravated the situation by letting students control meetings, and not allowing security to intervene when necessary. This breakdown of institutional control has resulted in a drop of student enrollment and the failure of the college to currently find a successor President.

My view of the necessary condition for nationalism:

The straightforward answer is: South Africa, from July 9 to July 18, 2021. As a background to what occurred, see: 2021 South African unrest.

Here is a video of the recent events in South Africa:

where do such rebellious people come from? Slums. And it only takes some event such as the killing of George Floyd in the United States for the alienated poor to go on a rampage. Below are videos describing some slums around the world.

Here is a video of the Kibera Slums in Kenya:

Here is a video of a slum in Mumbai:

Here is a slum in Rio de Janeiro, Brazil:

Desmond Morris, a zoologist, in the book, The Human Zoo (1969), writes: “Man is a tribal animal, and the great super-tribes will always be in competition with one another.” p. 117 of chapter 4: “In-groups and Out-groups.”

Watch below the BBC six-part series “The Human Animal,” presented by Desmond Morris in 1994.  Tribalism is covered in the 3rd part.

Nationalism is one form of expression of tribalism. It is the desire to have your nation or tribe be a State.  The trouble arises when your tribe or nation is believed to be superior to other tribes or nations.  This is what happened in Nazi Germany, especially when the tribe or nation is seen as a Nordic warrior nation, with an exaggerated image of self-importance.

Sebastian Junger – Why Tribalism Is Critical 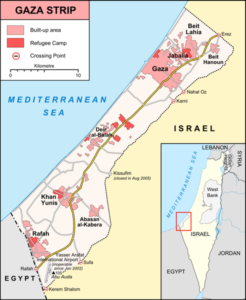 Here are the reports of Abby Martin who visited Israel and  Palestine for one month: