Below is George Carlin’s reading of the preface to his book Brain Droppings, 1997.  Further below is the transcript. At the bottom, Carlin reads his whole book.

For a long time my stand up material has drawn from three sources.  The first is the English language. You know, words, phrases, sayings — and the ways we speak. The second source — as with most comedians — has been what I think of as the “little world,” those things we all experience every day: driving, food, pets, relationships, and idle thoughts. The third area is, what I call, the “big world”: war, politics, race, death — the social issues.

So, without actually having measured, I would say this book reflects the balance rather closely. Now the first two areas in the book will speak for themselves. But concerning the big world, let me say a few things.

I’m happy to tell you that there’s little in this world that I believe in. Listening to the comedians who comment on political, social, and cultural issues, I notice that most of their material reflects kind of an underlying belief that somehow things were better once, and with just a little effort we could set them right again. They’re looking for solutions and rooting for particular results, and I think that limits the tone and substance of what they say. They’re talented and funny people but they’re really nothing more than cheerleaders attached to a specific wished-for outcome.

I don’t feel so confined.

I frankly don’t give a fuck how it all turns out in this country or anywhere else for that matter. I think the human game was up a long time ago when the high priests and traders took over, and now we’re just playing out the string.  And that is, of course, precisely what I find so amusing! The slow circling of the drain by a once promising species and the sappy ever more desperate belief in this country that there is actually some sort of an ‘American Dream’ which has merely been misplaced.

The decay and disintegration of this culture is astonishingly amusing if you’re emotionally detached from it.  And I’ve always viewed it from a safe distance, knowing I don’t belong. Doesn’t include me, it never has. No matter how you care to define it, I do not identify with the local group, planet, species, race, nation, state, religion, party, union, club, association, neighborhood-improvement committee. I have no interest in any of it.

I love and treasure individuals as I meet them, I loathe and despise the groups they identify with and belong to.

So if you hear something in this book that sounds like advocacy of a particular political point of view, please reject the notion. My interest in issues is merely to point out how badly we’re doing, not to suggest a way we might do better.

Don’t confuse me with those who cling to hope. I enjoy describing how things are, I have no interest in how they ought to be. And I certainly have no interest in fixing them. I sincerely believe that if you think there’s a solution, you’re part of the problem.

P.S. In case you’re wondering, personally I’m a joyful individual, I had a long happy marriage and a close and loving family, my career has turned out better than I ever dreamed, and it continues to expand. I’m a personal optimist, but a skeptic about all else. What may sound to some like anger, is really nothing more than sympathetic contempt. I view my species with a combination of wonder and pity, and I root for its destruction. And please don’t confuse my point of view with cynicism–the real cynics are the ones who tell you everything’s gonna be all right.

And P.P.S., by the way, if by some chance you folks do manage to straighten things out and make everything better, I still don’t wish to be included. 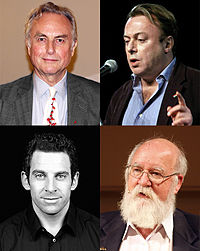 The “Four Horsemen” Clockwise from top left: Richard Dawkins, Christopher Hitchens, Daniel Dennett, and Sam Harris. According to Richard Dawkins, “We are all atheists about most of the gods that societies have ever believed in. Some of us just go one god further.”

Richard Dawkins, The God Delusion, 2006.
Christopher Hitchens, God is Not Great: How Religion Poisons Everything, 2007.
Daniel Dennet, Breaking the Spell: Religion as a Natural Phenomenon, 2006.
Sam Harris, The End of Faith: Religion, Terror, and the Future of Reason, 2004.

Steven Weinberg: Is It Anti-Science or Just Confusion?

Chomsky on Science and Postmodernism

1. Claims containing incompatibilities have bullshit claims.
2. What is incompatible with well-grounded science is bullshit.

Two classic books about science and religion are:

Andrew Dickson White, A History of the Warfare of Science with Theology, 1897.

Martin Gardner,  Fads and Fallacies in the Name of Science, 1952.