I will start with the Wikipedia description of the “Age of Enlightenment” or, as it also may be called, “Age of Reason.” Post-modernists refer to this and other cultural phenomena as “Modernity.”

Andrew Dickson White, A History of the Warfare of Science with Theology, 1897.]

There was, of course mathematical and some astronomical science, some technical knowledge, common sense, the principle of contradiction, and lots of religion and superstition. With the scientific discoveries, there occured a challenge to religion and superstitions. Those who embraced logic and science became “enlightened.” Those who resisted logic and science remained “unenlightened.” Enlightenment — as I see it — implies secularism (irreligion or non-religion). [There is an organization called “Brights.” It could just as well also be called “Enlightened.”]

So, who are the unenlightened? For starters, all those who embrace a religion. So, using the results of the 2015 PEW poll, 84% of the world is probably unenlightened, and there probably are some in the remaining 16% who are unaffiliated with any religion, who are also unenlightened for embracing some other form of superstition. 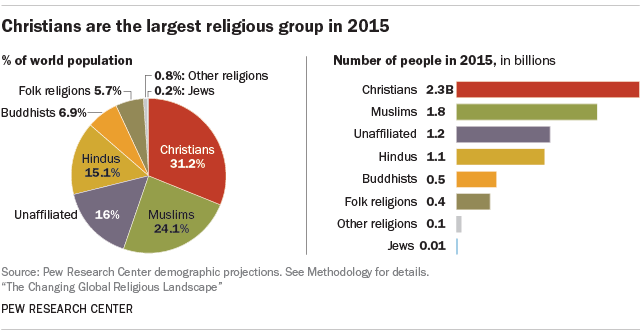 Talking about enlightenment, here is an enlightening poll: 1 In 4 Americans Thinks The Sun Goes Around The Earth, Survey Says